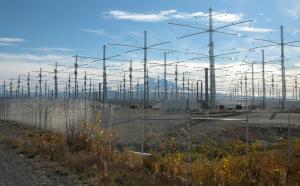 It’s been a suspected death beam, a secret tool to control the weather and even a weapon to manipulate the human mind. Now, the High Frequency Active Auroral Research Program, better known by its acronym, HAARP, has reached the final stage of its strange journey that began with Cold War concerns about nuclear war: Next month, the Alaska-based research station will be transferred to civilian control.

HAARP will be handed over in August to the University of Alaska, confirmed Othana Zuch, an Air Force spokesperson. A ceremony for the handover is also scheduled for that month.

Located on a site near the town of Gakona, Alaska, HAARP consists of 360 radio transmitters and 180 antennas, which are used to generate radio waves that heat up the ionosphere by accelerating electrons, allowing scientists to conduct experiments.

When it was first conceived during the Cold War, HAARP was going to study whether currents of charged particles traveling through the ionosphere, a region of the upper atmosphere, could be used to transmit messages to nuclear submarines lurking deep underwater. When the Cold War ended, HAARP supporters offered up other uses, like examining ways to detect underground facilities in countries like North Korea…Continue Reading